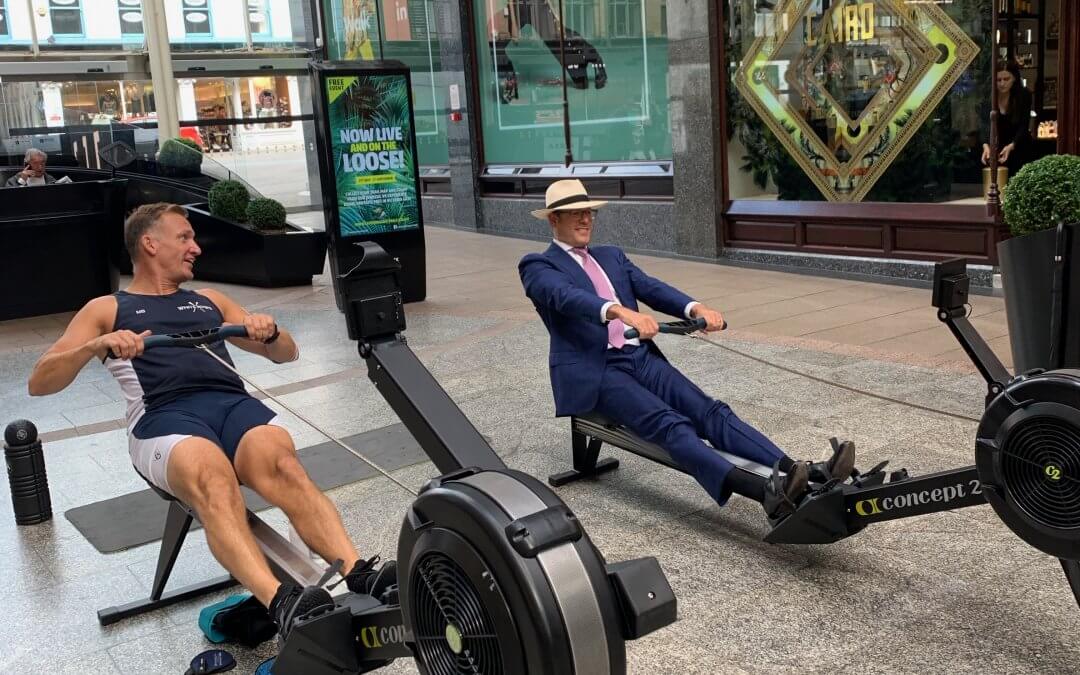 As part of my preparation for the Talisker Whiskey Atlantic Challenge, I thought it would be useful to have a good benchmark of how strong I am, both mentally and physically, and how my rowing technique is looking four months ahead of the race, when there is still time to tweak my training programme, if necessary.

I decided to row for 24 hours continuously.

I wanted a public place, somewhere where you could attract a lot of interest and hopefully raise a lot of money for Macmillan in the process. Harvey Nichols very kindly allowed me to use their event space in the Victoria Quarter, and after a restless nights sleep, my wife and I packed up all of the kit and the rower and met with Macmillan and Val at @rawfit outside the Victoria Quarter and we set up the rowers at 0745.

By 0900 everything was set up, signage was up, my ridiculously large nutrition station was set up, drinks made, and all set…My daughter counted me down….3…2..1 and I was off.

My first victim was the legend that is James Michaelsberg, immaculately dressed in his handmade suit and Panama  hat and on his way to his tailoring office overlooking my rower; he jumped on the rower next to me and kindly donated whilst creasing his perfectly pressed trousers. For the first hour not much happened; around 1000 Marvin arrived, on his way home from a good night out and jumped on and smashed it for five minutes.

Visitors peaked around lunchtime and we had a number of rowers, who found it impossible to walk past the second erg. We had TeamGB rowers and club rowers from Leeds and Reading, who put me though my paces. By 1600 it slowed right down and my wife, who was there all 24 hours supporting me, were alone for a few hours. Then the diners and party goers arrived. That was hilarious.

If you have ever seen anyone row drink, its a very funny sight, and there were plenty. Almost all were good natured, but there is always one… Luckily, Victoria Quarter security were keeping an eye on me, and they swiftly and professionally dealt with it.

The doors were closed at 2300 and by 2335, my wife and I were alone. Thats when I really felt it. At that point I had been rowing for 15 hours solid, I was feeling it in my hip flexors and my arse, which had gone numb hours previously…but without people to talk to, race against and have fun with, the boredom made it difficult to motivate myself. This slightly concerned me as being a solo rower, I will be spending two months like this, alone and trying to motivate myself, definitely food for thought..

As the pain started to set in I tried some painkillers and anti-inflammatories, they didn’t touch the sides, so rather than up the ante to codeine, which would have make me drowsy, I stopped altogether and just muscled through it. I did however, change my routine; up till that point I had been rowing for 90 minutes and then taking a short bathroom break and change to throw calories down my neck. I also took the opportunity to stretch off and get the hips moving, I made a very strange sight goose-stepping and twerking my way to the bathroom! After the pain/boredom/tiredness kicked in I moved from 90 minutes to 60 and then 45 minutes, with the food/stretch routine to and from the bathroom.

A special thanks to Paul @lift_row_eat_grow for all of his advice/support/nutrition suggestions etc. A great man who gives a lot of himself to others.

All of a sudden the last 100 minutes arrived, and I rowed those straight without a break. My daughter, Charlotte, Macmillan (Matt and Adele) and my trainer and good friend Val arrived. Val was an absolute star, he lent me his rower, brought a massage table to the Victoria Quarter and at one point when my arse went into cramps (about halfway through), massaged out the knot and got me moving again, and generally gave me enormous confidence and self belief. I literally can’t thank him enough.

I stepped off the rower feeling surprisingly good. I was shattered (as was my incredible wife – who had been there throughout), but felt i could have continued.